How To Release Tight Rear Deltoids And Shoulder Muscles

Many people have tight rear deltoids and Shoulder muscles, one of the most common issues is the insertion/upper portion of the Lats/Lat. Often due to the Dorsi muscles being overused in vertical pulling actions (Pull-ups, Lat-Pull-downs, etc.) due to the middle & origin portions of the Lats lacking intrinsic control.

In such a scenario, as the insertion/upper portion of the Lats is definitely not big or strong enough to pull the heavy load upwards, the Teres Majors will be recruited to help.

This causes both sets of muscles (Insertion/upper portion of the Lats & Teres Major) to get overworked, causing excessive tightness at the rear deltoids & region near the arms pits causing shoulder discomfort + pain.

Here’s an awesome stretch to release the Insertion/Upper portion of the Lats & Teres Major muscles !

Things to note when executing the stretch:

• Grab a stick (Broom stick, Golf club or PVC stick) & position it under the armpits

• Grip the closer end of the stick that is behind the body & bring it closer to the shoulder. Ensure the stick is held between the index finger & thumbs before stretching.

• Point the elbows outwards & relax the shoulders whilst letting the elbows drop down. Then use the opposite hand to support the further end of the stick in front, with an underhand grip.

• Slowly drop the elbows outwards & down more, while your opposite hand move the further end of the stick upwards.

Hitting A Plateau In Training? Click HERE to see our Online Coaching option! 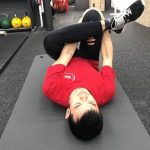 How To Stretch Your GlutesStretches 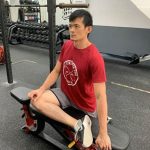 How To Do A Pigeon Pose For Hip MobilityStretches